SELMO via our engineer - and vice versa.

Alex Schlager, SELMO project engineer and software developer from the very beginning, in an interview – Alex about SELMO, SELMO about Alex:

Before SELMO:
Electrical engineering education at HTL Salzburg (graduated in 2013), several years working as an automation engineer in the automotive sector, graduated in 2019 with a bachelor’s degree in mechatronics and business at FH Oberösterreich Campus Wels, currently in the first semester of the master’s programme in mechatronics and business, focus on smart production.

Why automation as a focus?
I have always been fascinated by breathing life into machines. Machines only become smart through software. And SELMO beats all other software solutions for me, because only our technology makes software hardware-independent and machines really smart.

Motto?
You grow with the challenge!

SELMO means for me …
Simplifying complexity -> step by step, bit by bit. Our SELMOstudio shows how this works.

I became a SELMO developer because …
I am fascinated by the simplicity of the technology. A sentence you often hear as an automation engineer and as a plant operator is: “It’s complex.” With SELMO, that will soon be a thing of the past. I am convinced of that.

In the team it is important to me that …
every opinion is heard. I appreciate the interdisciplinary nature of our team.

How would you explain SELMO to your fellow students in one sentence?
We develop a product that generates plant software directly from the software model.

And how would you explain it to someone who has no idea about the subject matter?
SELMO is software that automatically generates software for machines.

Alex, we really appreciate having you with us. 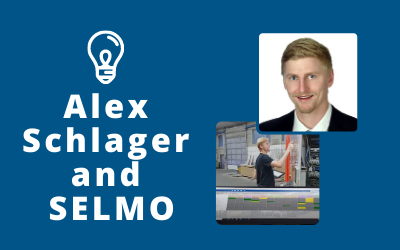